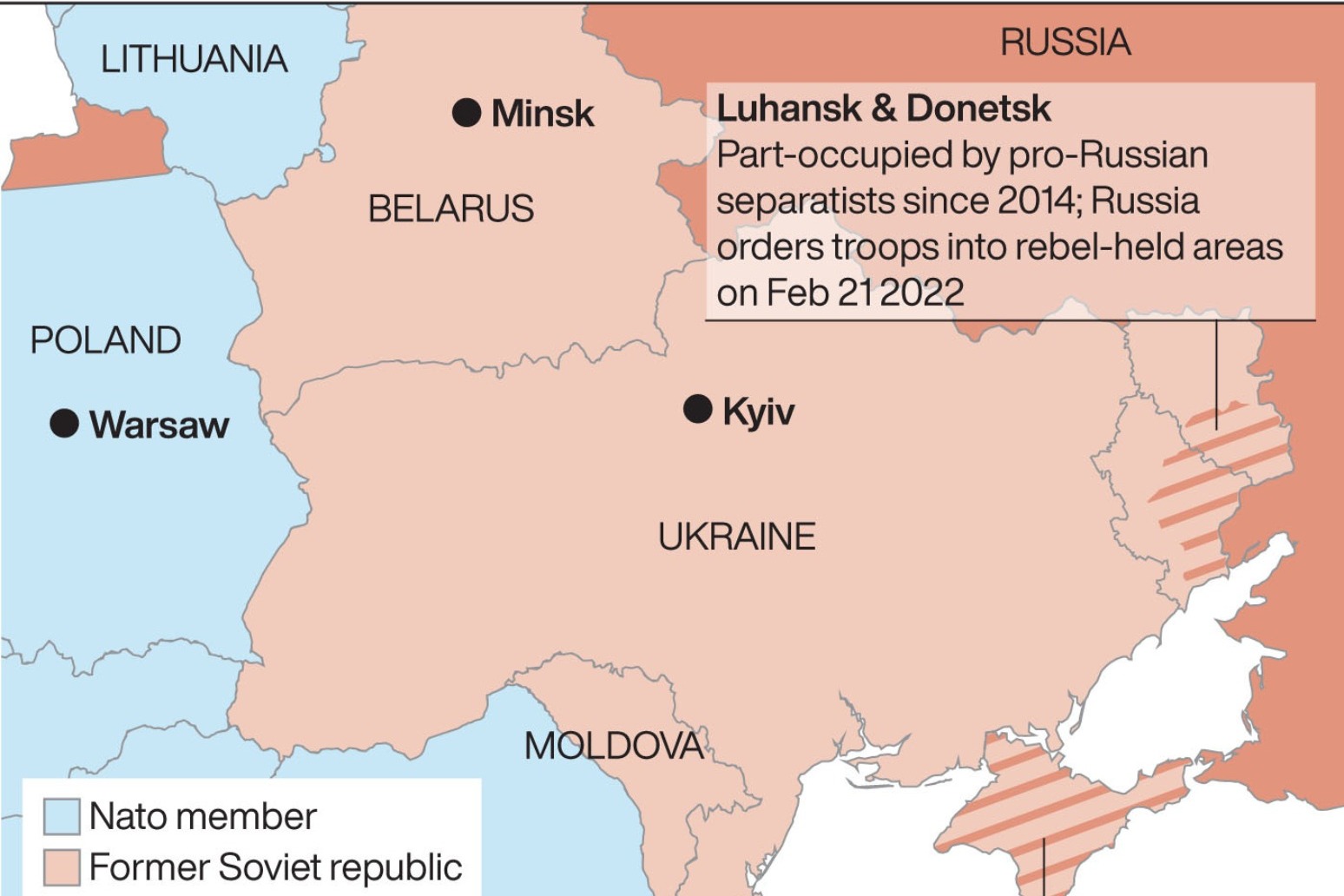 Ukraine’s president has declared martial law and urged citizens not to panic as Russia launched military strikes on the country, while the country’s foreign minister called it a “full-scale invasion”.

The Russian president announced the action during a televised address early on Thursday morning, saying the move was a response to threats from Ukraine.

The agency said that the Russian troops unleashed an artillery barrage as part of an attack backed by Belarus and Ukrainian border guards were firing back, adding that there was no immediate report of casualties.

Russia’s military said it had targeted Ukrainian air bases and other military assets and had not targeted populated areas.

Explosions were heard in the Ukrainian capital of Kyiv as well as Odesa and Kharkiv following Vladimir Putin’s announcement that the military operation had begun.

The sound of distant blasts were picked up in a live broadcast from US outlet CNN, causing reporter Matthew Chance to put on a flak jacket.

The Ukrainian Minister of Foreign Affairs, Dmytro Kuleba, said that Russia has launched a “full-scale invasion of Ukraine”.

Mr Kuleba said that Ukraine would defend itself against the Russian aggression “and will win”.

He said: “Putin has just launched a full-scale invasion of Ukraine. Peaceful Ukrainian cities are under strikes.

“This is a war of aggression. Ukraine will defend itself and will win.

The world can and must stop Putin. The time to act is now.”

Meanwhile, Ukraine’s ambassador at the United Nations has told the Security Council that Russian President Vladimir Putin has “declared war on Ukraine”.

He also pressed his Russian counterpart to state that Russia will not shell and bomb Ukrainian cities.

Ukrainian ambassador Sergiy Kyslytsya said that if Russian ambassador Vassily Nebenzia was not in a position to give a positive answer, he should relinquish the presidency of the Security Council, which Russia holds this month.

The Ukrainian then asked for another emergency meeting of the Security Council, calling on the UN body “to stop the war because it’s too late to talk about de-escalation”.

Mr Kyslytsya then asked if he should play the video of Mr Putin announcing military operations being launched in Ukraine.

Mr Nebenzia replied: “This isn’t called a war. This is called a special military operation in Donbas.”

Mr Guterres urged the Russian president to withdraw his troops and added: “In the name of humanity do not allow to start in Europe what could be the worst war since the beginning of the century, with consequences not only devastating for Ukraine, not only tragic for the Russian Federation, but with an impact we cannot even foresee in relation to the consequences for the global economy.”

“What is clear for me is that this war doesn’t make any sense,” Mr Guterres added, stressing that it violates the UN Charter and would cause a level of suffering that Europe has not known since at least the 1990s Balkans crisis.

Market benchmarks in Tokyo and Seoul fell 2% and Hong Kong and Sydney lost more than 3% on Thursday. Oil prices jumped nearly 3 dollars (£2.22) per barrel on unease about possible disruption of Russian supplies.

The European Union Aviation Safety Agency (EASA) is warning air operators of a high risk to civilian aircraft over Ukraine, reminding air operators that “this is now an active conflict zone”.

In the bulletin issued early on Thursday, EASA said that: “Airspace and critical infrastructure, including airports, are exposed to military activities which result in safety risks for civil aircraft. In particular, there is a risk of both intentional targeting and misidentification of civil aircraft.”

It added: “The presence and possible use of a wide range of ground and airborne warfare systems poses a HIGH risk for civil flights operating at all altitudes and flight levels.”

It recommended that, “additionally, as a precautionary measure, operators should exercise extreme caution and avoid using the airspace” within 100 nautical miles of the Belarusian- and Russia-Ukraine border.

The websites of Ukraine’s defence, foreign and interior ministries were unreachable or slow to load on Thursday morning after a wave of distributed-denial-of-service (DDoS) attacks.

In addition to DDoS attacks on Wednesday, cybersecurity researchers said unidentified attackers had infected hundreds of computers with destructive malware, some in neighbouring Latvia and Lithuania.

Asked if the denial-of-service attacks were continuing on Thursday morning, senior Ukrainian cyber defence official Victor Zhora did not answer. “Are you serious?” he texted. “There are ballistic missiles here.”

“This is terrible. We need the world to stop it. Immediately,” Mr Zhora said of the offensive that Russian President Vladimir Putin announced before dawn. 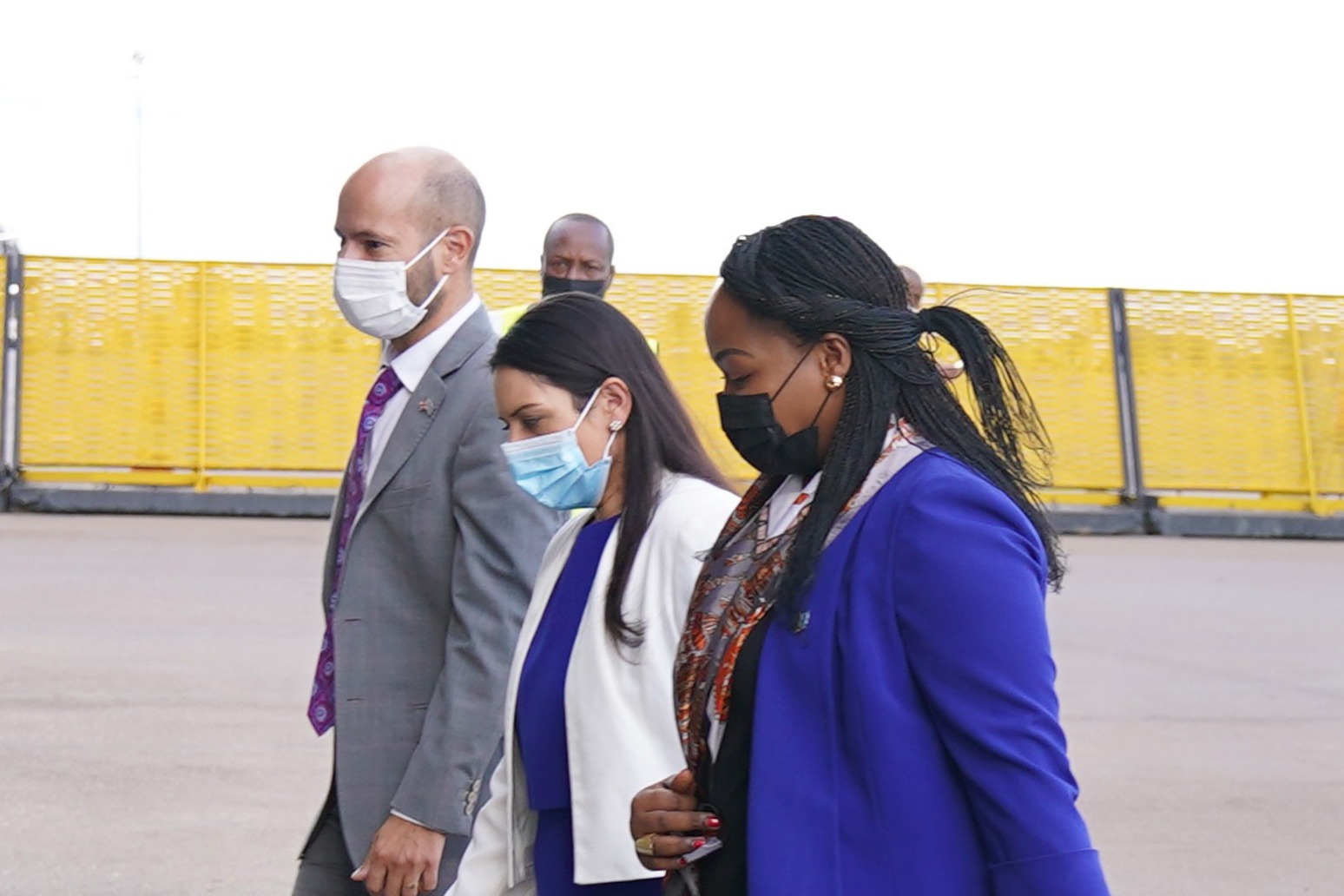 home secretary priti patel is expected to sign a deal with the east african nation during a visit on thursday, with ... 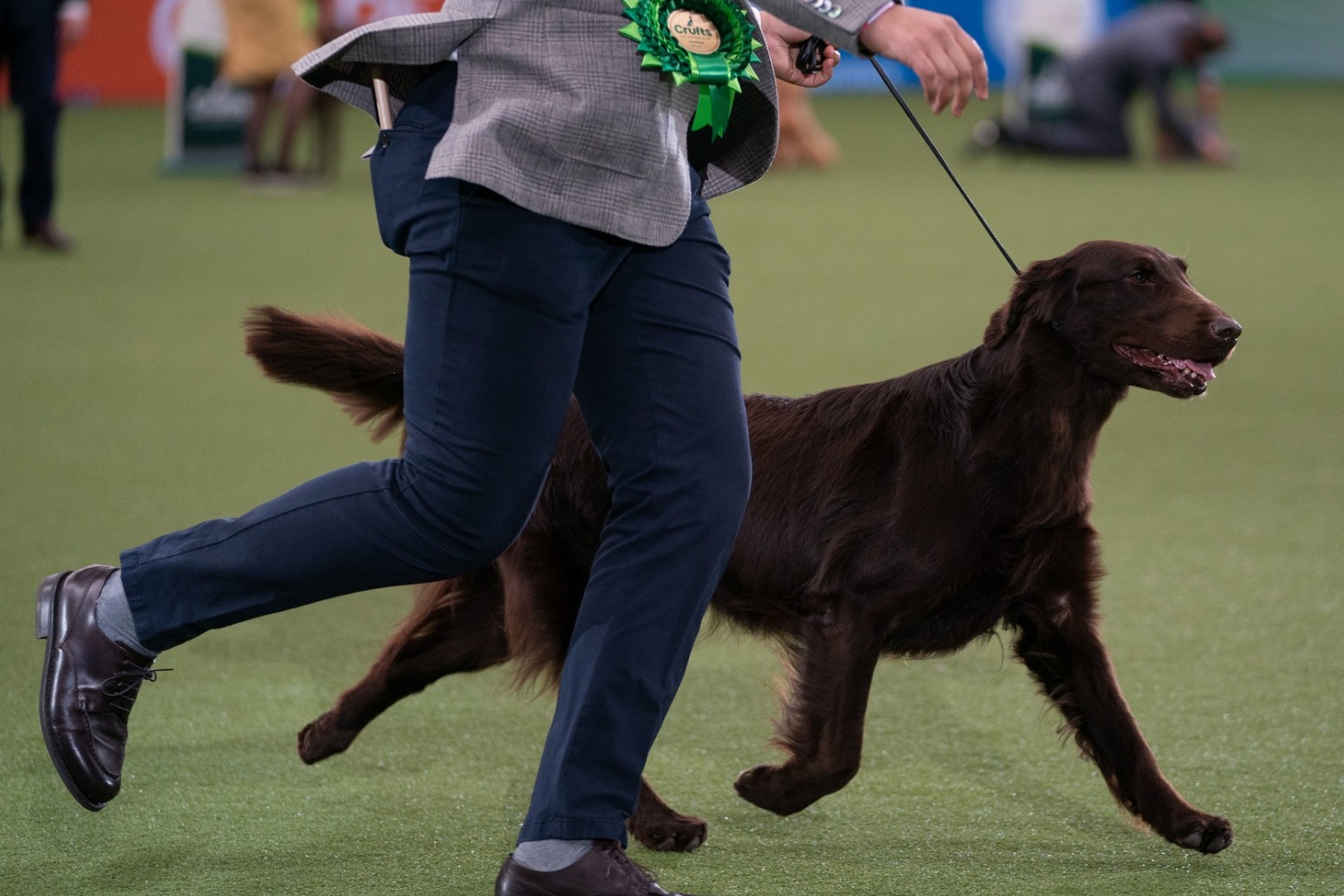 alex verdu munoz was pronounced dead on may 15 at hmp strangeways in manchester, staffordshire police said. he had been...