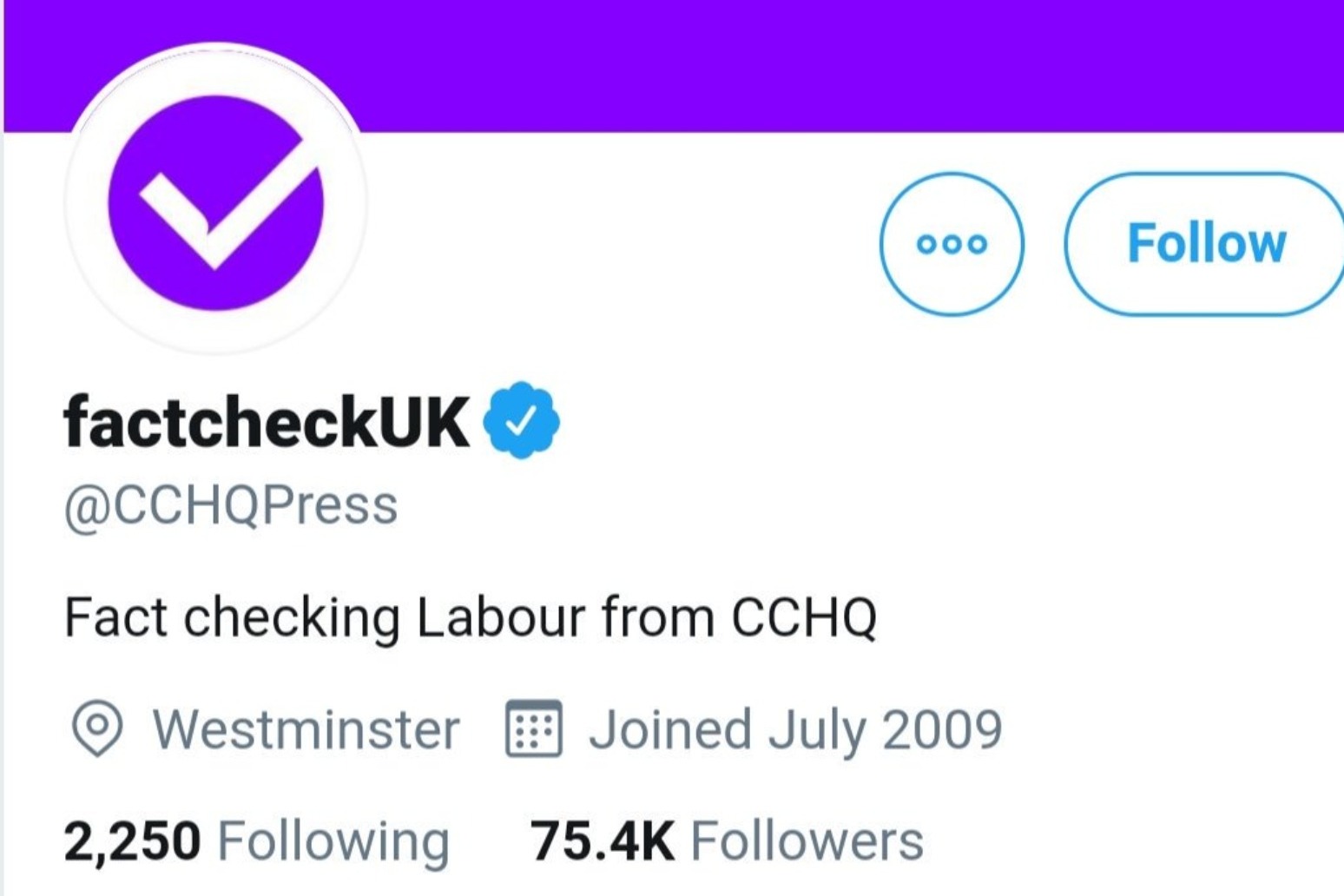 The Conservative Party has faced criticism after one of its official Twitter accounts was rebranded as a fact-checking service during the ITV leaders' debate.

The move was criticised by independent fact-checking charity Full Fact, which tweeted: "It is inappropriate and misleading for the Conservative press office to rename their twitter account 'factcheckUK' during this debate. Please do not mistake it for an independent fact checking service such as @FullFact, @FactCheck or @FactCheckNI"

The @CCHQpress account is verified by Twitter, displaying a blue tick which is intended to denote that a user is genuine.

Twitter warned that any further attempts to "mislead people" during the UK election will result in action.

"Twitter is committed to facilitating healthy debate throughout the UK general election. We have global rules in place that prohibit behaviour that can mislead people, including those with verified accounts," a spokeswoman said in a statement.

"Any further attempts to mislead people by editing verified profile information - in a manner seen during the UK Election Debate - will result in decisive corrective action."

The Liberal Democrat press office posted an image suggesting they were reporting the account to Twitter for "pretending to be me or someone else".

They tweeted: "And people wonder why trust in politics has been eroded @CCHQPress"

Labour's David Lammy tweeted: "The Conservative Party press office @CCHQPress rebranding themselves as 'FactCheckUK' shows what disdain this party and this government has for the truth."

"The Electoral Commission must investigate and punish this blatant attempt to decieve (sic) the public."

Meanwhile, some other Twitter users also changed their display names to factcheckUK and posted critical comments about Mr Johnson.

The Twitter display name was changed back to CCHQ Press shortly after the debate ended. The Conservative Party has been contacted for comment.

Tory Party chairman James Cleverly told BBC2's Newsnight: "The Twitter handle of the CCHQ press office remained @CCHQPress so it's clear the nature of the site.

"The reason we did that is because we were calling out the inaccuracies, the lies that were coming out during the debate. The NHS is not for sale."

He replied "I disagree" when told the party had been misleading the public, and said the change would have been an idea from the party's "digital team".

Asked if he knew about the change, Mr Cleverly said: "The digital team have got a remit, I set that remit, they work within the remit and I'm absolutely comfortable with them calling out when the Labour Party puts what they know to be complete fabrications in the public domain - and we will call that out every time they do it."

in a speech in the northern english city of manchester, the birthplace and home of emmeline pankhurst who led britain&rs...

a host of defeated labour mps and candidates have stressed that "fundamental change" is needed at the top of t...