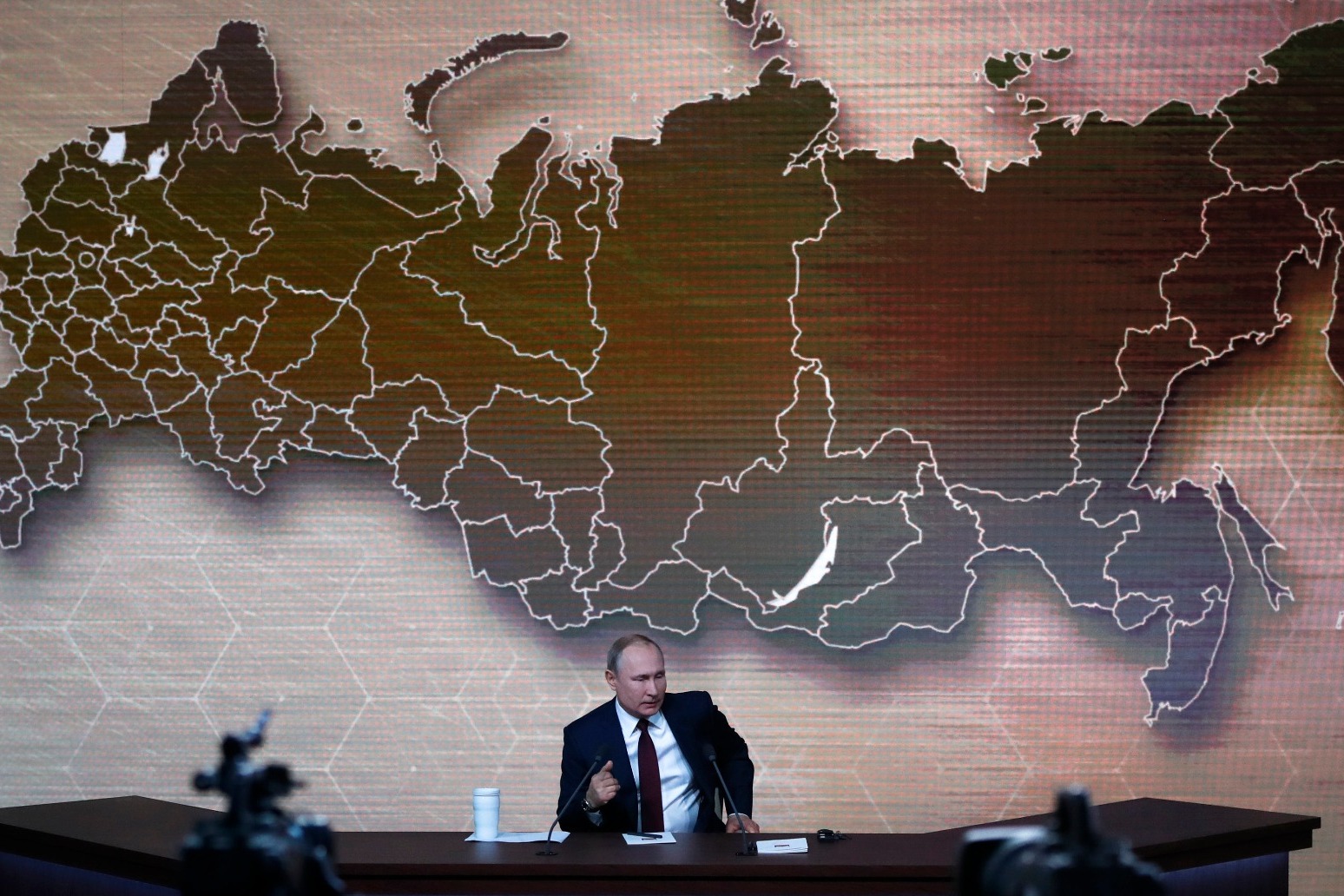 Russian president Vladimir Putin has said US President Donald Trump's impeachment is far-fetched. Mr Putin said on Thursday at his annual news conference in Moscow that the move is a continuation of the Democrats' fight against Mr Trump.

He predicted the impeachment motion will be rejected by the US Senate.

Mr Putin said that "the party that lost the election is continuing the fight by other means".

He likened the impeachment to the earlier US probe into Mr Trump's collusion with Russia, which he downplayed as being groundless.

On Wednesday night, Mr Trump was impeached by the US House of Representatives, becoming only the third American chief executive to be formally charged under the Constitution's ultimate remedy for high crimes and misdemeanours.

The historic vote split along party lines, much the way it has divided the nation, over the charges that the 45th president abused the power of his office by enlisting a foreign government to investigate a political rival ahead of the 2020 election.

Having approved that abuse of power charge by a vote of 230 for to 197 against, the House then approved the second article of the impeachment resolution - that Mr Trump obstructed Congress in its investigation - by 229 votes to 198.

The articles of impeachment, the political equivalent of an indictment, now go to the Senate for trial, most likely in January.

Mr Trump is expected to be acquitted by the Republican-led chamber, but would still then have to run for re-election carrying the enduring mark of impeachment on his purposely disruptive presidency.

Democrats led Wednesday night's voting, framed in what many said was their duty to protect the Constitution and uphold the nation's system of checks and balances.

Republicans stood by their party's leader, who has frequently tested the bounds of civic norms.

Mr Trump called the whole affair a "witch hunt," a "hoax" and a "sham".

Mr Trump began the historic day tweeting his anger at the proceedings, before heading for an evening rally in Battle Creek, Michigan.

As the House debated the articles of impeachment, Mr Trump's tweets switched to all capital letters: "SUCH ATROCIOUS LIES BY THE RADICAL LEFT, DO NOTHING DEMOCRATS. THIS IS AN ASSAULT ON AMERICA, AND AN ASSAULT ON THE REPUBLICAN PARTY!!!!" he wrote.

At the rally, a defiant Mr Trump pumped his fist before an enthusiastic crowd, boasted of "tremendous support" in the Republican Party and said: "By the way it doesn't feel like I'm being impeached."

House speaker Nancy Pelosi, once reluctant to lead Democrats into a partisan impeachment, now risks her majority and speakership to hold the president accountable.

What Ms Pelosi called a sad and solemn moment for the country, coming just 11 months after Democrats swept control of the House, actually unfolded in a caustic day-long session that showcased the nation's divide.

"Today we are here to defend democracy for the people," Ms Pelosi said as she opened the debate.

The resolution said the president "betrayed the nation by abusing his high office to enlist a foreign power in corrupting democratic elections," and that he obstructed Congress' oversight like "no president" in US history.

"President Trump, by such conduct, has demonstrated that he will remain a threat to national security and the Constitution if allowed to remain in office," it said.

The House impeachment resolution laid out in stark terms the articles of impeachment against Mr Trump stemming from his July phone call when he asked the Ukrainian president for a "favour" - to announce he was investigating Democrats including potential 2020 rival Joe Biden.

At the time, Mr Zelenskiy, new to politics and government, was seeking a coveted White House visit to show backing from the US as he confronted a hostile Russia at his border.

He was also counting on 391 million dollars (£298 million) in military aid already approved by Congress. The White House delayed the funds, but Mr Trump released the money once Congress intervened.

in place of the quarantine arrangements will be a traffic light system, with officials placing countries into green, amb...

markle's father, thomas, had been due to walk his daughter down the aisle at the glittering ceremony at st george's chap...